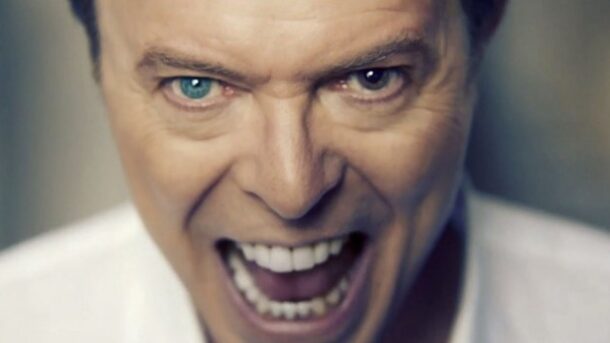 From Starman to Valentine’s Day. As we hurtle further into the twenty-first century Christopher Ashton contemplates Bowie’s art and creative processes and suggests that as a society we could perhaps benefit from adopting the late star’s approach..

Where are we now? At the start of 2021, we would appear to be in something of a mess: the atomized reality of lockdown life, environmental collapse, and the rise of populist politics are giving us all something to chew over.

We find ourselves scanning news sources with a sense of dread: in only the first week of the year we saw Trump’s armed militia storm the Capitol, and there are serious concerns about where all this is heading. And yet, in among these grave chronicles of our times, articles on the five-year anniversary of David Bowie’s passing have blossomed, sifting through his legacy, assessing his ongoing relevance.

Gorgeous, exotic plants rising from the cracks and manure of our misery. Attempts to capture that lightning-flash in a bottle. Allow me to present you with yet another! It starts with something he said back in the late nineties:

“The idea of mixtures has always been something that I found absolutely fascinating: using the wrong pieces of information and putting them together, and finding a third piece of information. I mean it’s what our lives have become in the twentieth century. We live and, assume our morals and our stances from the fragmented pieces of information that we glean from the media.”

Bowie was a cultural magpie. Every aspect of his art was informed by, and openly exhibited, the frankly astonishing range of references and sources that he brought together – in his words, using ‘wrong’ pieces of information and putting them together was an alchemical process, to become something beautiful and ‘right.’

His complete transparency about this practice renders any notion of plagiarism irrelevant. In Bowie’s world there is no sense in nonchalantly concealing the artifice of his art. Instead, he executes a kind of reverse sprezzatura, and openly wears his art on his sleeve.

Is it this openness to interpretation that gives his work such universality? He seems less concerned with delineating explicit meaning than in the production of ‘presences.’ With which we do what we will, ultimately internalizing and ‘owning’ them to some extent. And though his songs contain multiple references, I would argue that his strongest songs often refer to one other main source.

Take Starman for instance. I didn’t actually notice that the chorus was lifted from ‘Over The Rainbow’ until very recently. Talk about hidden in plain sight. I have always enjoyed the song on it’s own terms – but perhaps the phantom twin was working away in the subconscious all these years, magnetically re-assembling the long abandoned components of the Tin Man as the song triggered all the powerful childhood memories associated with ‘The Wizard of Oz’ somewhere just under the surface of the conscious mind. Knowing where the chorus comes from diminishes none of its power. And the man behind the curtain remains as magical as ever.

And so to Valentine’s Day. Released in 2013, it tells the story of a High School shooting as recounted by a friend of the protagonist, Valentine. This superlatively American phenomenon is described as thus; ‘the teachers and the football star,’ in ways that anchor the setting firmly on the other side of the Atlantic. However, again we see how introducing a counterpoint to this opens up new dimensions to the song.

Guitarist Earl Slick has explained how in the early phases of the song’s composition, he was struck by a resemblance to the phrasing of the Kinks. Spurred on by Bowie’s enthusiasm about this discovery, the guitar work on the final version was developed to produce a distinct resemblance to ‘Waterloo Sunset.’ And if this link was not made explicit enough, we see the London lovers of the Ray Davies song become ‘Teddy and Julie,’ thanks to an appropriately transatlantic consonant shift.

What is the ‘third piece’ of information procured in ‘Waterloo Sunset’? We see the couple taking solace from loneliness and alienation in their relationship, where they feel ‘safe and sound.’ Contrasting brutally with the couple’s fate in Valentine’s Day: ‘Teddy and Julie down.’  Perhaps this collision indicates how times have changed, become colder, more dangerous. Valentine’s targeting of Teddy and Julie seems to be motivated by the bitter hurt of the marginalized.

We can easily imagine the Valentine of 2021 fall prey to the fragmented theories proliferating on social media, assuming his morals and his stances from what he finds there. Maybe he would no longer channel his energies into planning a High School shooting, but would find kinship as part of a larger group of the kind seen storming the Capitol and threatening civil war? As a portrait of the dispossessed, the song has never seemed so prescient.

At the close of the twentieth century, Bowie was entirely correct in stating that our lives are assembled from fragments of meaning. As we move onwards without him, we see that this trajectory of fragmentation has only continued. And as a society, we are morally bound to find a better way to navigate it. The alarm bells should be ringing loud and clear all over the world. Maybe now we can use our time to concentrate on putting the pieces together to find that new idea, or third way, where we can all sing together?

Christopher Ashton is a writer, academic and musicologist.